Book Expo America, or BEA as it’s more commonly known, is the largest annual U.S. book industry trade show and gathering of the book tribe. BEA was held this past weekend, from May 29 through the 31st, and we attended the event at the Javits Center in New York City.

Our day Friday started with rising at 4am to try to get tickets to the Suzanne Collins autographing of Catching Fire, the sequel to 2008’s hot YA book *The Hunger Games. *Tickets were free, but were distributed on a first-come, first-serve basis at the Javits center beginning at 6:30am.**We arrived at Javits at 5:30 – we wanted to be there plenty early enough that we wouldn’t miss out – and we weren’t the first ones in line. By 6:00am, the line was quite long. Suzanne Collins was obviously the hot ticket this year; there seemed to be more people in line who wanted tickets to Suzanne Collins than for Julie Andrews. The really nice man running the autographing ticket booth joked, “Oh, didn’t you hear that Suzanne Collins was cancelled?” I told him he’d better not joke like that unless he wanted a riot!

We succeeded in getting a ticket, and walked away feeling like we’d gotten the golden ticket in American Idol!

The exhibit hall wasn’t scheduled to open until 9, so we went to get breakfast while we waited. We were back in time for the 9am starting bell (OK, I didn’t really hear a starting bell, but there might as well have been one) and we started out walking the exhibit floor for a while. One of the first things we saw was this really cool flying saucer that you can build: 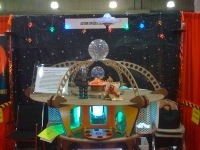 I don’t know if you can tell the size from this picture, but it’s about as tall as a person. It comes as a book of plans, and all the parts are things that you can easily find at places like Home Depot. It does require some drilling, but they’re working on making pre-drilled parts that you can purchase. I think the top parts are supposed to light up, also, but they didn’t have it quite fully assembled yet when we stopped by the booth. It’s called The Flying Saucer Planbook and it’s available from http://ascplanbooks.com

I then attended a panel on Books to Film, sponsored by IBPA and presented by Rocky Lang, BooksToFilm.tv. The panel included various literary agents and media companies. The panel was interesting, but unfortunately the main thing I got out of it is just how hard it is to sell your book to film or TV. It seemed to me that you really need someone who knows what they’re doing to sell it. They said that you can’t just send a book; you really need to send a package which includes the things that will catch the interest of a film or TV executive, including a book trailer. BooksToFilm.tv showed some of their trailers, or “Sizzle reels,” as they called them, and I will say that I think they do a nice job with them, better than a lot of the ones I’ve seen.

While I was at the panel, Nick and David walked the exhibit floor and went to some autographing sessions.

At 2pm I attended the awards ceremony for the ForeWord Magazine Book of the Year Awards. Ratha’s Courage was a finalist in the fantasy and science fiction category, but unfortunately, it didn’t win. I was thrilled to see that Women Astronomers: Reaching for the Stars, by by Mabel Armstrong, won the Gold award in the Young Adult Non-fiction category. I don’t have any association with this book, but my friend and distributor, Jacqueline Simonds of Beagle Bay Books, distributes it, and I had purchased a copy last year for my niece.

At 3pm we lined up to get our autographed copy of Catching Fire. My son David was the first in line, because he was determined to get a copy and got there early. After all our hard work and early rising, we were thrilled to get a copy!

I ended the day by attending the 7x20x21 panel: “Publishing’s most innovate thinkers talk about what inspires them”. There were 7 presenters, each of whom had 7 minutes and 20 PowerPoint slides to talk about whatever they wanted to talk about. Each slide moved forward automatically at 21 seconds, forcing the presentation to move quickly. The presenters were: Debbie Stier, Harper Studio; Pablo Defendini, Tor.com; Jeff Yamaguchi, Doubleday/Knopf; Matt Supko, ABA/Indiebound; Chris Jackson, Spiegel and Grau; Richard Nash, ex-Soft Skull; Lauren Cerand, independent public relations representative (from Richard Nash’s blog)

The panel was fascinating, dynamic, and thought-provoking. I was particularly taken with Pablo Defendini’s message that e-books and the digital word won’t kill books, but instead will allow us to return to books as an art form and a craft, as all the mass-market type books move towards digital formats.

Friday evening I had planned to attend both the BEATweetup, a gathering of book people who Twitter, and the Kidlit Drinks Night, a gathering of children’s book people, but by the end of the day I was so exhausted (and suffering from an ear infection) that I just didn’t have the energy to do both. I attended the Kidlit Drink night, where I talked to Betsy Bird (who blogs at School Library Journal as Fuse #8), Pam Coughlan (who blogs at MotherReader), Cheryl Klein, Senior Editor at the Arthur A. Levine Books imprint of Scholastic (and Harry Potter editor), Barry Lyga, author of several books including The Astonishing Adventures of Fanboy and Goth Girl (and its forthcoming sequel, Goth Girl Rising), and other people whose names I’ve now forgotten (I’m sorry! I really am!) It was fun, but I only stayed about an hour; between the exhaustion and the ear infection, I had to get back to the hotel and collapse. Thanks so much to Betsy Bird for organizing it.

I’m always on the lookout for interesting small press and self-published books, and The Soulstealer War [http://www.…

Tomorrow morning the exhibit halls open and Book Expo America, the annual gathering of the book tribe, goes into…