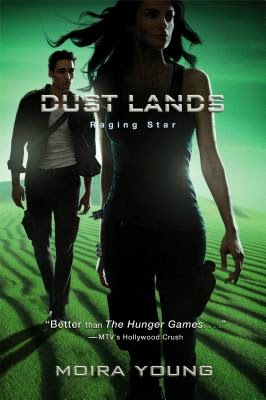 New Eden is a paradise: a fertile land surrounded by post-apocalyptic wastelands. New Eden holds promise and hope for the future, and one man, DeMalo, who calls himself The Pathfinder, has a vision of leading humanity into that future. DeMalo feels that the future belongs to the strong, that only the strong and healthy can bring about a utopian future. In DeMalo’s New Eden, those not strong and healthy enough to be among the chosen are either exiled, enslaved, or put to death.

Saba and her friends, including her twin brother Lugh and younger sister Emmi, have gone underground, and this small band of guerrillas fight back against DeMalo in any way they can. Saba secretly meets with Jack, her love and heart’s desire, who gives her strategic information uncovered by his group of rebels. The only problem is, Saba can’t let anyone in her group know that Jack is still alive, because some of them hate him and would kill him on sight, including her brother Lugh.

Saba loves Jack, but then why is she so drawn to DeMalo? Why does the heartstone warm when she’s near him, as well as when she’s near Jack? DeMalo is smart, charismatic, and seductive, and he runs New Eden with a tight control. Saba’s Free Hawks will have to be smart, too, and find a new way to fight back if they hope to defeat DeMalo.

Raging Star is the conclusion of the trilogy that began with Blood Red Road, and it may be the best of the three. Raging Star has the same driving plot, awesome characters, and distinctive voice as the other books, but it goes deeper in exploring the themes. The huge gray area between right and wrong is explored in a thoughtful way. DeMalo truly believes that what he’s doing is good and right. He’s trying to rebuild and repopulate the Earth, turn the deserts into paradise. Is it so wrong to eliminate the weak in service of that goal? Yes, he kills people, but Saba and her group have killed also in fighting back against DeMalo. DeMalo is charismatic and convincing, and it’s hard for Saba to know what’s right. And so the girl known as the Angel of Death is left trying to find a better way.> We did wrong today at the bridge. An’ he’s wrong. He is wrong. What’s right must lie somewhere else. Between us maybe. Or beyond us.

Saba also keeps secrets: from Jack, from Lugh, from everyone. She does it with the best of intentions, but she discovers, as many have, that the more you lie, the more you have to lie to cover your lies. Other characters also have secrets, and the weight of secrets threatens to destroy the group.

Saba has always been a great character. She’s a survivor and a fighter, who’ll do whatever it takes to save the ones she loves. But what if fighting isn’t enough? What if you’re in a fight you can’t win? Saba experiences some real character growth as she tries to resolve her dilemmas. It’s also great to see Emmi come into her own in this book, and become more than just the little sister.

As with the other books, it’s hard at first to adjust to the dialect and the unusual punctuation. The entire book is written without quotation marks. Dialog just flows in with text. However, it doesn’t take long to get used to it, and before too long it seems so natural you don’t even notice it. I could hear Saba’s distinctive voice in my head as I read.

Altogether, Raging Star is a moving, gripping, and sometimes heartbreaking book. Both the plot and the character arc will keep you turning pages.

I do have one complaint, and that’s the cover. The picture of two random people against a green background just doesn’t do anything for me. I assume they’re supposed to be Saba and Jack, but they don’t look anything like I imagined these two, and in fact they really just look like someone snapped a photo of two random people walking down the street in any modern city, and Photoshopped over a vaguely post-apocalyptic background. I didn’t care for the cover of Rebel Heart, either.

I didn’t notice a lot of diversity in this book. Saba is described as dark, but that’s in comparison to her golden brother Lugh, so it’s not clear whether she is actually dark skinned or just a dark haired caucasian. Other characters are described in ways that don’t make clear their ethnic origins, at least not that I could tell.

One of the characters is an older man who wears dresses. He’s a likable character who plays an important role in the rebellion.

Teens and adults who enjoy dystopian and post-apocalyptic books with strong female protagonists. Recommend this series to fans of *The Hunger Games.

Chorus (Sequel to Coda) by Emma Trevayne Note: Chorus is the sequel to Coda, and this review will contain…

The Stark Law (Game of Thrones)

The Stark Law: No two living Starks can ever occupy the same place at the same time. Corollary: If…