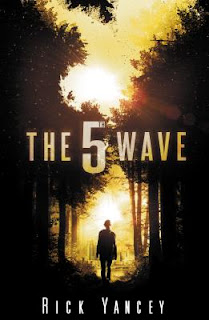 The 1st Wave: Lights Out
The 2nd Wave: Surf’s Up
The 3rd Wave: Pestilence
The 4th Wave: Silencer

Plot: Nearly 7 billion people are dead, almost the entire population of the world, killed in four successive waves of destruction sent by the aliens. Cassie Sullivan has lost everyone she loved, all dead — except possibly one, and to that one she made a promise that she intends to keep no matter what the cost.

Seventeen-year-old Zombie has lost everything and everyone, too. He failed to protect his sister when she needed him, and now he has no desire to go on. Then Zombie is given a new purpose and a chance to redeem himself when he’s recruited into a newly formed military unit comprised entirely of children and teens being trained to fight back against the alien invasion.

These teens, and the other few remaining survivors must make a choice. To hide. To run. Or to stand and face whatever comes. To choose to be human, even when it’s the hardest choice of all.

FTC required disclosure: Review copy sent by the publisher. The bookstore links above are affiliate links, and I earn a very small percentage of any sales made through the links. Neither of these things influenced my review.

Recommending YA at the North American Discworld Con

This past Sunday I spent the day at the 2013 North American Discworld Convention, where I had a great…

Things I learned today at BEA